Biography:
I haven't been writing since I was in diapers and I haven't been an avid reader since I learned my ABC's. I have, however, always been a daydreamer spinning tales after tales in my head. So far I've been a vampire, jungle nymph, time-traveler, ghost, noblewoman, survivor on a deserted island, a witch and so, so much more that it'd take months to count out every occupation and scenario.

I have been writing for several years now and reading became an obsession roughly in my late twenties. Of course I read books before that, but since I'm a university business graduate I really didn't have much time to read in my free time. My free time back then was time to party! And to belly-dance, and practice Taekwondo.

I live in Iceland and I often say that my real name sounds like Klingon to foreigners so I don't even bother revealing it. I took part in a Taekwondo tournament in the USA once and felt so, so sorry for the announcer. Otherwise, I'm a happy single mother of two adorable boys. I came out as pansexual in my late thirties after years of struggling to figure myself out. I've been involved with the Icelandic National Queer Organization since. Writing my books has helped me figure myself out.

Anyway, I'm a friendly, easy-going person, so don't be afraid to talk to me. I have a weird sense of humor - either you get me or you don't. There are various ways to reach me if you want to chat.

If you wish to stick my banner on your site, here are some options: 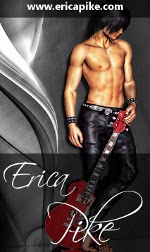