I've been preparing for GayRomLit 2013 and the massive SWAG I'm bringing. You'd think I'd had months to do this but somehow I've left a lot of it to the last minute.

Curious about my SWAG? This is what I have from last year, minus the colorful one with the old covers: 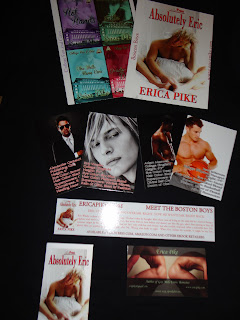 Here's what I'm bringing on top of that (I don't have them in my hands yet, so I'm just posting the SWAG art:

(front)
(Sorry about Jazz's hair, I ended up doing it myself >.< I know he looks like a badly Photoshoped Fabio)

Then I have individual postcards of all the Boston Boys novels and the College Fun and Gays short stories: I have Icelandic candy again, only different this time.

Finally, I'm bringing about 50 paperback copies of Hot Hands to give away: 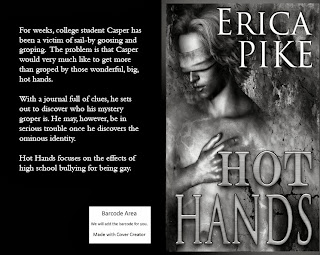 Yup. I figured it would be awesome SWAG and they're not that expensive to print in comparison to other things. For those who can't make it but want one, it's $3.99 on CreateSpace and Amazon. I have a copy in my hands and it's a cute little book of 32 pages of the story + some extra pages. I'm so pleased with it. I will probably make the other College Fun and Gays books available in print as well (in fact, I'm bringing a few copies of one as special prizes), but it'll take time. If people don't want them in individual copies, they can also be bought as a bundle. The winner of the Hot in Fall Blog Hop is Pam! I've contacted you about your prize :)
Posted by Erica Pike at 4:22 AM No comments: 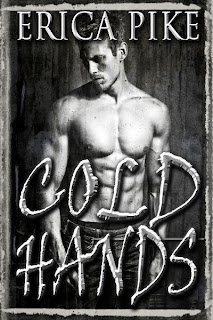 Cold Hands received a 4-star review from The Romance Reviews. Here's a snippet:

"As much as Casper wasn't ready to forgive, neither was Jaime. He knew what he had done and was therefore very patient and understanding. He was willing to wait for Casper to be ready to move further in the relationship, or not. He was also okay with things staying the way they were, as long as he was able to be with Casper. It was all very sweet and touching and I loved every minute of it."

Thank you, Breann at The Romance Reviews :)

Posted by Erica Pike at 4:24 PM No comments:

"This book far exceeds my expectations. She has given the good time party boy who doesn't believe in love a story that made me laugh and cry. I also wanted to seriously punch his lights out from time to time. Erica Pike has shown a vulnerable side to Jazz that I never dreamed he possessed. I am so blown away by this book that it will be on my re-read list forever [...]"

Black Hurricane has been reviewed by The Romance Reviews. It received 5 stars and a wonderful review. Here's a snippet:

"...just having Jazz telling the story is powerful and Erica Pike manages so effortlessly to do the wonderful character building of all the other players in the story. Dean of course is someone we get to know really well, then Eric, Alex, Cal-Al, Benji and many others are so wonderfully drawn and each have their own personality to add to this marvelously entertaining, emotional and heart-tugging story."

Thank you, Susan Mac Nicol at The Romance Reviews :)

Posted by Erica Pike at 3:10 AM No comments:

"When I read the blurb for Black Hurricane, I thought, “Oh great! Another rocker-dun-me-wrong book!” Boy, was I wrong! Erica Pike has taken that old plot bunny and blown it clear out of the water!!"

"This is a beautiful character driven story, with a smooth plot flow. Erica has given us characters that are vivid, three dimensional, and that are anything but your stereotypical rock star or jilted lover. Even the secondary characters are solid, with all the unique quirks that make us individuals."

Posted by Erica Pike at 7:09 AM No comments: 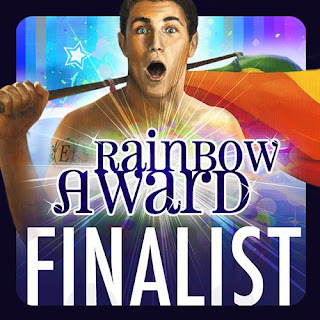 Wow, what a pleasant surprise when I checked my Facebook notifications today. Black Hurricane is now a finalist in the 2013 Rainbow Awards among other fantastic books. It's in the Gay Contemporary Romance category. Here's a special shout-out to my buddies Cherie Noel, Z. Allora, Clancy Nacht and Thursday Euclid who also made it to the finals ^.^

Black Hurricane is already a winner after having come this far. Thousand hugs to the judges :)

Posted by Erica Pike at 9:52 AM No comments: 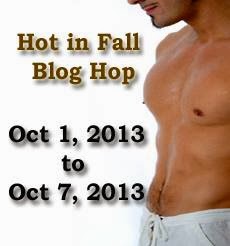 I'm going to keep this short, because you have other m/m authors to visit ;) You want to know what's hot this fall? These covers made by Scarlet Tie Designs:

Twenty-three year old Jasper Jones fell in love with Dean McQueen at fourteen, but after a disastrous relationship, Jazz would like nothing better than to see the rock star choke on his own vomit.

After a catastrophic reunion, Dean seems bent on destroying Jazz’s life. It all started when an impromptu bar performance ended up on YouTube and Jazz became an internet sensation overnight. The name “Jazdean” keeps popping up in headlines and the paparazzi stalk his every move. To make matters worse, Jazz is about to end up on the streets for the second time in his life.

In a desperate attempt to keep his home, Jazz signs a deal with Dean’s band, Black Hurricane, to perform at a couple of concerts. It feels like one of Dean’s feeble attempts to get Jazz back, but painted into a corner like he is, Jazz has no choice.

For weeks, college student Casper has been the victim of sail-by goosing and groping. The problem is that Casper would very much like to get more than groped by those wonderful, big, hot hands. With a journal full of clues, he sets out to discover who his mystery groper is. He may, however, be in serious trouble once he discovers the ominous identity.

Hot Hands focuses on the effects of high school bullying for being gay.

FREE on All Romance eBooks, Smashwords, Kobo, B&N, and Goodreads.

And then there are these below. If you leave a comment and a way for me to reach you, you might win a copy of one of these bestsellers:

“Hot-Hands” and Casper have been dating for a month, but their relationship is about as smooth as shattered glass. It doesn't help that Hot-Hands is racked with guilt over his high school bullying of Casper, or that Casper darts away whenever his boyfriend gets a little too frisky.

Desperate to hang onto Casper, Hot-Hands tries to earn back the trust he destroyed years ago, so they can face their disastrous past and have a chance at a happy future.

Cold Hands focuses on high school bullying for being gay. This is the sequel to Hot Hands and contains big spoilers if read first.

When College professor Daniel Corrigan was brutally kicked out of his home after revealing his true sexuality to his wife, he had to make a whole new life for himself. For the first time in two years Daniels main heartache isn't the none-existent relationship with his two kids, but the fact that the grade-A-sex deal with his student Troy Anderson is about to expire. After a whole semester of office fun, Troy has managed to squeeze his way into the core of Daniels soul. Daniel, however, is positive hes nothing more to Troy but a teacher who can modify a grade.

When Harley’s roommate, Ryan, is asked on a date by one of his neighbors, Harley is devastated that his wall-mate mistook not-hot Harley for super-hot Ryan. Helping Harley through his heartache is Tasha Novokov, the other neighbor, who is tall, dark, and impossibly handsome.

The Walls Have Ears focuses on insecurities of first-time dating: Is the guy I like gay or straight?

College student Coby is being stalked by a young guy and has no idea why until someone suggests that the stalker may have a crush on him. The idea both excites and terrifies Coby, who is so deep in the closet he can barely manage to think the word “gay” without freaking out.

Welcome Brother focuses on acceptance in college and gay bashing.

Here are the other m/m authors taking part in this blog hop :)
Posted by Erica Pike at 2:22 AM 17 comments:

Thank you, all, for participating in the Sick-Pack Stud-A-Thon Giveaway :) I've drawn the winner and he/she is...

Congrats ^.^ I will contact you.
Posted by Erica Pike at 1:45 AM No comments: