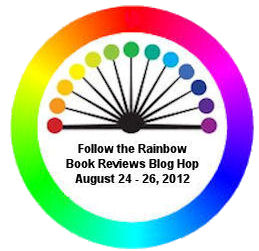 I'm taking part in the Rainbow Book Reviews Blog Hop over the weekend. I'm a day late, so I'll let my part of the contest run through August 25th-27th. I hope that's okay with the organizers.

The reason for this hop is to celebrate the launch of a new review site: Rainbow Book Reviews. They're doing a very generous giveaway on their own site, but there are also over 70 GLBT authors giving away individual prizes. Just click the link - but first, read on for my contest:

Now, what does writing GLBTQ literature mean to me?

A hell of a lot. Not only has it helped me open my eyes to the many issues regarding the GLBTQ community, but has also urged me to help in any way I can. I was never a homophobe. Granted, I didn't understand it when I was a teen, but I was never against GLBTQ people. In my twenties I'd scowl at people who spoke against homosexuality, because I felt that they were being idiotic. In my thirties I started writing and reading m/m stories, and now I understand that things won't change by staying silent. I'm a member of Iceland's GLBTQ organization and a proud supporter. I also take it upon myself to attempt to "correct" people when they're unknowingly sounding homophobic (with jokes, generalizations, comments and such that aren't necessarily meant in a demeaning way - as would be the case with most Icelanders). But there's more. I've also discovered new things about myself after I started reading GLBTQ lit, things I'm still figuring out. This literature has also brought me close to new people, friends I now find are invaluable, so I owe this category a lot.

Now, for my contest. I'm giving away an e-copy of The Walls Have Ears. If you already own it, you can choose from the other College Fun and Gays stories (just got the cover for the next one, will reveal it soon!). All you have to do is leave a comment with a way for me to each you :)

When Harley’s roommate (Ryan) is asked out on a date by one of his neighbors, Harley is devastated that his wall-mate mistook not-hot Harley for super-hot Ryan. Helping Harley through his heartache is Tasha Novokov, the other neighbor, who is tall, dark, and impossibly handsome.

When Harley’s affections shift to Tasha, his heartache hits an all time high because with all the girls hanging around, Tasha has to be straight.
Posted by Erica Pike at 2:37 AM

Email ThisBlogThis!Share to TwitterShare to FacebookShare to Pinterest
Labels: giveaway