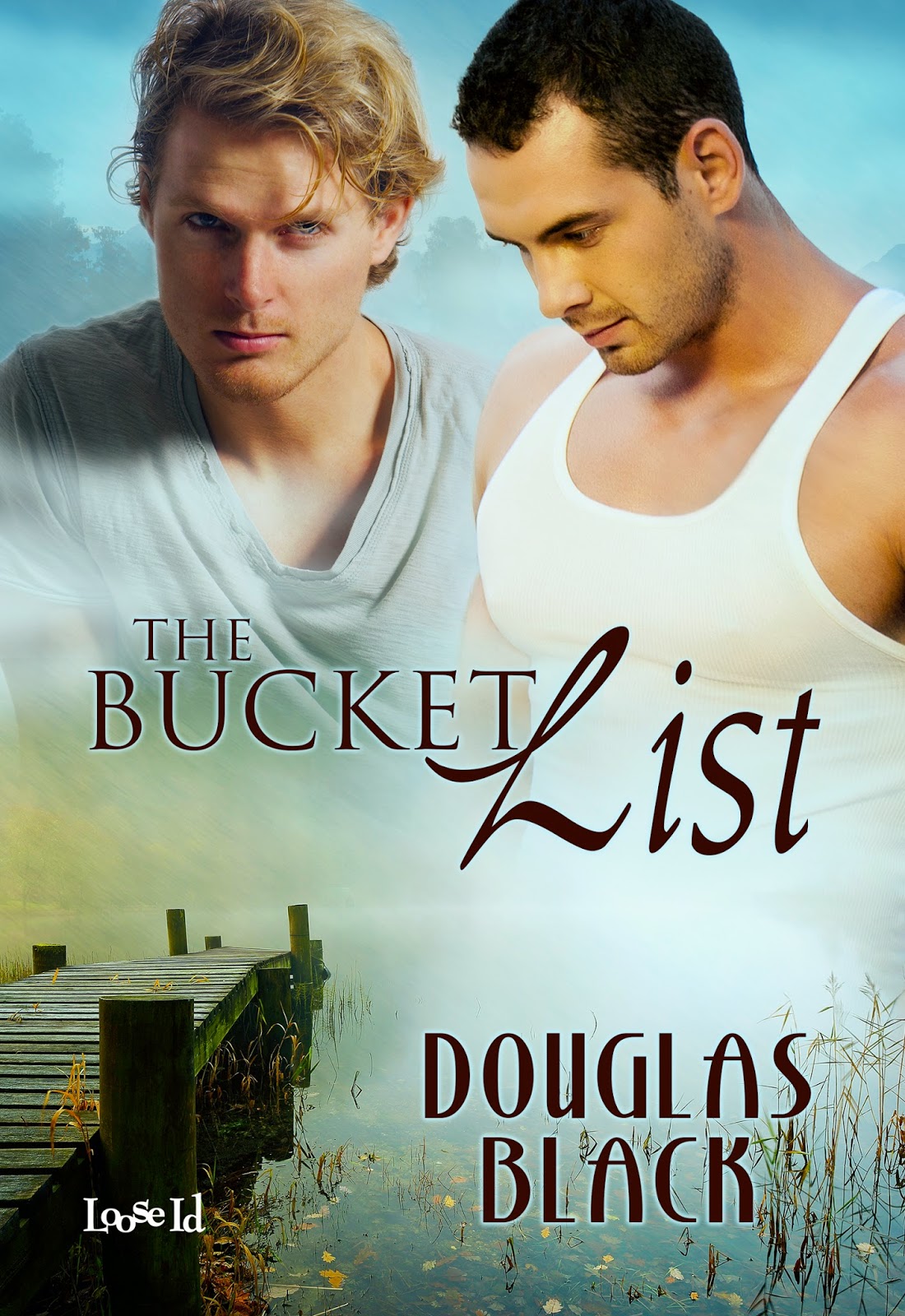 My buddy, Douglas Black, is back on my blog to give you a glimpse into his new novella. Take it away, Doug!

Thanks so much for having me back on your blog. It’s certainly been a while, but in my absence I haven’t been idle. Funnily enough, I've been busy writing and for once I can say that and provide proof because I have a new release out!

When I was in my early twenties, I wrote a bucket list for myself. I put pen to paper shortly after I had finished my Masters degree. By that point, I had spent five years in higher education and for all of that time, my life revolved around studying. That had been my choice and I didn't regret it, but by the end of my Masters I was definitely suffering from a severe case of burn-out. I had one long summer ahead of me and, instead of spending it preparing for another four years in academia, I decided to redress the balance in my life by going out into the world and having some fun.

I remember walking in to a little café in the west end of Glasgow - it was probably April or May, but it was one of those dreich days Scotland does so well so I remember keeping my coat on even as I sat inside. I took a seat by the window and drank my overpriced coffee while watching the world go by. Gradually, I started to jot down a list of things I wanted to do, not just that summer, but as I went forward in life.

I still have that bucket list. Over the years it’s transitioned from hand-scrawled notes on loose sheets of paper, to a neat draft in a posh notebook, to a saved file on my computer. Lots of things have been added, far more than have been checked off, and it continues to do what it first did that day in that little coffee shop in Glasgow. It inspires me to keep moving forwards. It convinces me that there’s not much to be gained from just standing still.

My bucket list differs from my character Kade’s in a few ways.

Firstly, I actually wrote mine so all the things I put on it were things I really wanted to do. Kade is forced into going along with his bucket list ‘for his own good’.

Secondly, unlike Kade I wanted to make changes. I wanted to step out of my comfort zone and experience something new. Kade, at the start of the novella especially, is perfectly happy in his comfort zone, thank you very much.

No, that didn't happen to me, but that does happen to Kade. It could happen to you too, though, if you were to write a bucket list of your own, or dust down that old one still kicking about from the time when you decided you needed to make a change in your life. After all, they say life is out there and if that’s true you’re not going to experience it by sitting inside, reading this! Although please, do stay until the end.

If nothing else lists like this help you concentrate your thinking. They make you realize how much there is to do in life, how much is out there just waiting to be explored, and they help you to focus your attention on the future you want and how to achieve it, rather than on the little details that so often hold us all back. They help you look at the broader picture.

In my story, that’s exactly what Kade’s bucket list helps him to do, and that’s why I love this story so much. You get to watch a character change from a nervous, downtrodden man who is uncertain of himself into a man who, despite still going through some very tough times, is able to find a new path in life with that hot Australian surfer-guy I was on about before. Those things happen because Kade follows his bucket list, no matter how reluctantly. And if that’s not a pretty good reason to try your hand at writing one of your own, then I don’t know what is!

Blurb
When Kade Doherty gets dumped, he expects sympathy from his friends. Instead, he gets a bucket list. His friends want to help him enjoy life again, but Kade isn’t convinced a list of outlandish leisure pursuits will help much with that. To keep the peace he goes along with the plan and in the process, he meets Blake.
Blake’s Australian accent and surfer-boy looks are the stuff of sexual fantasies and Kade surprises everyone – including himself – when he wastes no time making a move.

Kade goes with Blake into the Scottish highlands, but just as he is beginning to get used to life with his very own Mr. Australia, reality comes knocking. Kade’s newfound happiness falls apart when his abusive ex demands they meet. Blake senses something is wrong and he wants to help, but Kade knows he can’t confide in Blake.

After all, Kade hasn't exactly been honest. He might feel like a different man when he’s with Blake, but Kade knows he’s still just an accountant from Glasgow with slight obsessive compulsions and a bucket list that someone else wrote. He knows Blake won’t hang around, let alone help, when he finds out the truth.


Kade made his way slowly over to Blake, keeping close to the relative calm of the curving bar. He stepped in beside his Mr. Australia. Blake didn't turn to look at him.

Kade assumed that, even given the circumstances, it was still acceptable to start with, “Hello.”
Blake turned his head, and Kade felt that warmth he had felt with his back to the fish tanks in the Asian supermarket. “Hi,” Blake said, his voice deep enough to carry against the music.
He turned, opening up his body and inviting Kade to step closer. Kade did. He wanted to, wanted to see if that strange connection he had felt earlier was still there between them.
“Who’s your friend?” Kade asked.
Blake just shrugged. “Don’t know. Just some kid. Art student, apparently. He was a good dancer, though.”
“Not a good kisser?”
Blake looked Kade up and down, taking his time doing so. Kade had always thought the idea that someone could undress you with their eyes was a concept fit only for the cheap romance novels his mum used to read, but he couldn't think of a better way to describe what Blake’s eyes had just done to him. The words needed to describe how that made Kade feel wouldn't be fit for polite company. Not that Kade was really in polite company.
“I wouldn't know. Didn't want to kiss him.” Blake reached out and stroked his hand down Kade’s right arm, from his shoulder to his wrist. He left it there for a few moments, holding tight, and then he pulled Kade’s wrist toward him. Kade’s hand landed on Blake’s hip, his thumb teasing Blake’s tight, strong stomach muscles. When Blake let go, Kade didn't move his hand away.
“Why didn't you want to?” Kade couldn't stop staring into those bright blue eyes.
Blake shrugged and wrapped the hand that had been around Kade’s wrist around Kade’s neck. “He’s not my type. And I was hoping I would meet someone else here tonight. I thought it was a long shot, but I didn't want to take the risk and ruin my chances.”
Despite his recent drink, Kade’s throat felt dry. He didn't even care if that was a lie. Blake’s strong fingers rubbed Kade’s neck just below his hairline.
“Who were you hoping to meet?” Kade asked.
Blake tugged him in close so their bodies were pressing together. Kade’s hand slipped around to Blake’s back, holding on tight as Blake put his lips to the side of Kade’s neck.
“You,” Blake whispered. They were so close to the loudspeakers that the word should have been lost, but Kade heard that loaded syllable and felt it translate like heat through his body, like he had just stepped into a hot bath.
“Are you here with somebody?”
Kade shook his head. He felt Blake spread his legs. There was barely any distance left between them.
“Then would you mind if I did this?”
Kade turned his head to find Blake’s lips less than an inch away from his own. He smiled and tried for one of those winks he was so not used to giving, and then let Blake close the distance between them.

Author Biography
Douglas Black was born and raised in bonnie Scotland. An archaeologist by trade, Douglas started writing MM erotica - as a means of avoiding starvation at university - before returning to the genre in 2012.

Welcome to your fantasy.