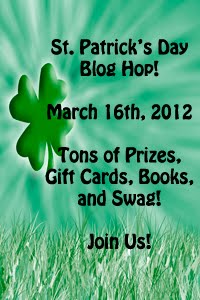 We don't celebrate it here, but all the green makes me think of summer, so I'm in!

There are two grand prizes. This is for the overall hop - not something I'm offering single handed ;)

Here's the main site. The more blogs you comment on, the more chances you have of winning.

But I know you're all here for MY prizes! (Come on, you know you are!). I'm giving away one e-copy of Grade-A-Sex Deal and one e-copy of The Walls Have Ears (once it releases) to two different winners (one book each). If you're interested in buying them, please click on their links to see the info on my webpage. Please, if you don't read m/m, let me know in your comment and I'll exclude you from my drawing. You'll still be entered to the grand prize drawing :) It'll give m/m readers more chance to win a book of their liking.

When Harley's roommate (Ryan) is asked out on a date by one of his neighbors, Harley is devastated that his wall-mate mistook not-hot Harley for super-hot Ryan. Helping Harley through his heartache is Tasha Novokov, the other neighbor, who is tall, dark, and impossibly handsome.

When Harleys affections shift to Tasha, his heartache hits an all time high because with all the girls hanging around, Tasha has to be straight.

When College professor Daniel Corrigan was brutally kicked out of his home after revealing his true sexuality to his wife, he had to make a whole new life for himself. For the first time in two years Daniels main heartache isnt the none-existent relationship with his two kids, but the fact that the grade-A-sex deal with his student Troy Anderson is about to expire. After a whole semester of office fun, Troy has managed to squeeze his way into the core of Daniels soul. Daniel, however, is positive hes nothing more to Troy but a teacher who can modify a grade.


Now, I'm supposed to talk about something Irish. I've been to Dublin once and loved it there. It was the first big European city I'd really had the chance to explore and I was fascinated by all the statues. Only a couple of weeks after I got back, I received a pen-pal request from an Irish guy called John. This was back when pen-pals used snail-mail and you waited in anticipation for the next delivery. Anyway, John ended up visiting Iceland and fell for my best friend. They dated for a while, broke up, and then got together again years later. They're married today and have a little girl :) Anyway, when I got my first phone call from John, I could not understand a WORD he was saying. Man, that accent had me going "yes...uhuh...mhm...yeah...oookay..." But I got used to it and have no trouble speaking with him on the phone today. The Irish I know are a jolly bunch and we get along great humor-wise. Almost as well as Icelanders and Australians (who are a perfect mix).

Anyway, just leave a comment below with your email address and you'll be added to the contest :) Happy Hopping!

Wait! While I have you here, I'd like to remind everyone of the M/M-only blog hop on May 17th: Hop Against Homophobia. Over 160 m/m authors, reviewers and publishers have signed up and we're expecting more before May rolls in. It's a great cause (held on the International Day Against Homophobia), so please mark it down if you're an m/m lit lover :) If you're an m/m author/reviewer/publisher, feel free to sign up.

Before I go, if you want to win a copy of Absolutely Eric (see the new cover!!), I'm having a giveaway at Goodreads, drawing two people who've added it to their to-read list before the book comes out. Giveaway ends on release day :)