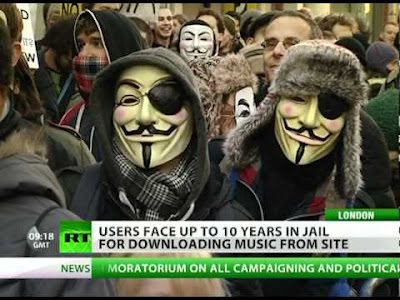 Piracy Boosts Sales. Uh-huh, and the cow really did jump over the moon!

I've been checking out the pirate sites and my books are all over the place! More people have downloaded than people who've actually paid for my books. How wrong is that? Now I'm wondering why I'm even bothering going through the months of writing, editing and promoting only to have my hard work stolen. Honestly, I could be using the time to make a lot more money doing other things. I don't care what justifications they give for uploading/downloading copyrighted material. It's illegal and it's preventing me from making money to buy food for my kids. Small-time authors like me aren't rolling in gold, people! We're just scraping by - and I, specifically, am toeing the poverty line (I'm not kidding here - I'm not even paying for that GRL trip, I'm being sponsored to go). Seriously, I'm disgusted.

I'm copying a "justification" to prove a few points. It's written in regards to the music industry. This is from a site called Ron Paul Revolution:

This new post about illegal downloading is the prompting of a band I like that was complaining about illegal downloads on facebook. Apparently 2 million copies of one of their albums was downloaded illegally and they are releasing a new album on tuesday. This means their band is being heard by many many people that may not have heard them otherwise. Even more, they actually said that THEY specifically do not make any money from the CD sales. So for the band, they actually get more out of illegal downloading. : /

It's only a matter of time, and perhaps we won't be downloading "illegally" but instead sharing freely in order to promote bands. Many bands are already against the recording industry and for music sharing. I think I posted about illegal downloading already...but oh well. This time I have links. Also, the band I was talking about is RED.

1) The reason the artists are not making money from direct CD sales is probably because they've signed a contract and gotten pre-paid. Once they've sold enough albums and made the record company that money back, the band will start to earn royalties from CD sales. It's the same with the major book publishers and it's called "earning out an advance". So no, currently that band isn't making money, but they will in the future - or they may not ever get there because people just download their stuff instead of paying for it. Mind you, there are no advances in the m/m book industry, so every download hurts the author's pocket directly.

2) "This means their band is being heard by many many people that may not have heard them otherwise." Okay, fine, I'll agree with this. But this is for bands who then go on to sell tickets to concerts. Authors don't have that. We just have our books.

3) "Companies that fail to change eventually fail" - Er...fail at what? Giving away their products? How the hell are they supposed to run a business if they do that? It's possible to buy almost every song ever produced online now, but they're still getting downloaded illegally. It's the same with books - most are out in ebook formats now, but they're still being downloaded (I heard that people used to scan paperbacks and share it that way online before ebooks).

4) It's only a matter of time, and perhaps we won't be downloading "illegally" but instead sharing freely in order to promote bands." Come on now, that sounds sooooo...weird (tempted to say "stupid" here, but I don't know all the facts). If you're thinking along these lines, then, okay, let's just give it all away. Hello! We're trying to make a career here and you're not helping, even if you believe you are - not in the book industry. Sure, some downloaders will leave positive book reviews (and trust me, it's the least they can do after stealing, even if they didn't like the book), but that's only a fraction of a fraction of those who download. Sure, they'll talk about the author and give him/her name recognition, but that just means that more people will head over to the pirate sites to download. There will be some who are honest and buy the books, but let's face it, with the world the way it is today, most won't.

If you're a person who downloads copyrighted material, please consider what you're doing. You're stealing from me and my kids. I don't care if you never end up reading the book, by downloading you're sanctioning the illegal act of file-sharing copyrighted material. You also may be compromising the morals of those around you, giving the message that it's okay to take something without paying for it.

I have never downloaded an ebook that I didn't pay for. I don't download copyrighted TV material or music either, unless I've paid for it. I do use pictures for my blog that I find on the internet. I give credit to each one, a link back to the site I found them on. Is that illegal? I don't know the specifics for pictures, but at the university we were taught that as long as we cite it, it is okay. I know a link back isn't a proper citation, but it's usually impossible to know who snapped the shot since it's been posted over and over and over on various sites. Mind you, I feel even more sorry for photographers than I do authors. At least an author's work will (almost) always be linked with their name.

After a great couple of days of writing, I'm feeling very disheartened and unmotivated right now...

Okay, end of rant, but not end of subject.

I want to send out a special thanks to the honest people
who actually pay for my books.
My kids thank you too!
*Hugs*