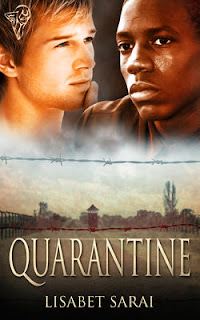 Please welcome my fellow m/m writer, Lisabet Sarai. Lisabet is doing a blog tour for her new release, Quarantine. Now, I don't know about you, but a title like that gets me curious! Plus, it's a sci-fi. *Adds to wish list.* She's giving away a title from her backlist at each stop, which means that she's giving away a title right here on my blog! Don't forget to leave a comment with your email address for a chance to win.

Now, on with the fun facts about Lisabet Sarai! You know me...I need to comment, so my comments are in blue ;)

I was named after Queen Elizabeth the Second because I was born in the year of her coronation.

So that will immediately let readers know that I'm no spring chicken, since Her Majesty the Queen is celebrating her Diamond Jubilee – sixty years on the throne – this year. Yes, I'll be hitting the big six-oh in January, and darn it, I'm hoping to have a huge party! Though perhaps not as big as the Queen's...

When I was in primary school, I wanted to be an astronaut.

When I watched Alan Shepard, the first American shot into space, on the black and white TV in our school cafeteria, I was overcome with wonder. I read science fiction (Robert Heinlein, Ray Bradbury, Isaac Asimov and anyone else I could get my hands on),  watched the television show “My Favorite Martian”, and daydreamed about discovering new planets and alien races. Only when I reached junior high did I learn that astronauts had to be perfect physical specimens. With my coke-bottle glasses and flat feet, I wasn't going to pass muster. It never occurred to me that being female might be an obstacle.

I've always written but never considered a career as a writer.

My love affair with words began very early. Family apocrypha relate that I was talking at six months old. (My husband says that I haven't stopped since!) My writing files include some stories and poems I composed when I was seven years old. I wrote fiction, poetry and plays throughout elementary school, high school, college and grad school. Writing has always been my favorite mode of expression. And yet it never occurred to me that I might make my living as an author. I expected to be a scientist. My role models were Marie Curie and Rosalind Franklin, not Charlotte Brontë or Anne Rice (even though I loved their books).

(Kind of the same with me, only I was going to be a business woman. Studied for it and all.)

While I was in graduate school, I regularly performed as a belly dancer.

You can see a photo of (a much younger) me in the gallery on my website, wearing a costume I sewed myself. I'd been exposed to Middle Eastern music and dance in high school and fell in love with it. Later I had the chance to take lessons and workshops from professionals. I still find it hard to sit still when someone starts playing a baladi or a ciftitelli rhythm, and I miss my zils.

(I belly danced too! Probably wasn't as advanced as you though.)

I've traveled to every continent except Australia (and Antarctica).

My husband seduced me in a Burmese restaurant with his tales of foreign adventures. We've been traveling ever since, though financial constraints and work requirements mean that our trips are shorter and less frequent than we'd like. The majority of our voyages have taken us to Asia or Europe, but I've also visited Morocco, Peru, Costa Rica, and New Zealand. I should mention that I still have a long wish list of places we haven't been!

(Ooooh! Have you been to Iceland yet?)

I don't like sweets and could live my whole life without chocolate.

Unbelievable as it may sound, I have very little interest in desert. I'd much rather have a second helping of the main dish. Meanwhile, chocolate makes me break out as if I were still a teenager. I don't really mind. Seriously! If all the chocolate in the world suddenly vanished, I wouldn't even notice.

Especially when I'm the cook!

I think I lived a past life in the Victorian era.

I guess this is more of a theory than a fact. As long as I can remember – long before the advent of steam punk - I've had a special attraction to Victorian architecture, fashion and literature. I dream of living in a gingerbread-ornamented “painted lady” in San Francisco, with a turret and a veranda. My high school photo shows a young woman with long hair, a long, tight-belted skirt and a high-necked, white-ruffled blouse with a cameo brooch. My novel Incognito features a Victorian subplot and I swear, writing Beatrice's diary entries from the 1880's felt as natural as breathing.

I seem to have a jukebox in my head.

I don't play any instrument but I probably can sing two hundred songs from memory – maybe more. A chance phrase that I hear or read is likely to set some song running in my mind, involuntarily. It doesn't seem to matter whether I like the song or not. Once the loop starts, the only way to interrupt it is to deliberately sing a different tune.

(You're like my cousin there. She knows all the words. I hardly know any.)

I never expected to get married, but last month my husband and I celebrated our thirty year anniversary.

There was so much divorce in my family, I couldn't see the point of marriage. In addition, I considered it highly unlikely that I'd meet one guy who could keep me from getting bored. Turns out I was wrong, though – and believe me, I'm very grateful!

(Oh wow, congrats! Sounds like you two are happy and have lots in common.)

My thanks to Erica for having me as her guest. This post is part of my blog tour to celebrate the release of my M/M science fiction novel Quarantine, which will run  through the 24th of July. I'll be giving away an ebook to one commenter at each stop on the tour. So leave a comment – and don't forget to include your email address so I can contact you!

I'll also be choosing one commenter from the entire tour to win the grand prize – a $50 All Romance Ebooks gift certificate. Meanwhile, all comments at my own blog Beyond Romance during the tour will also go into the drawing for the gift certificate.

You'll find the schedule for the tour in my July newsletter.

Check out my fantastic trailer here! And if you're interested in getting your own copy of Quarantine, just go to Total-E-Bound!

Thanks so much Lisabet! Those are very interesting facts. Now excuse me while I look up Quarantine ^.^