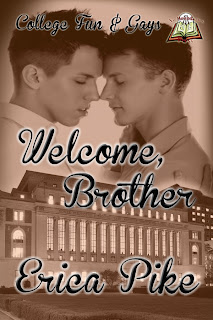 I was off by four days! I thought this title wasn't supposed to release until the 27th, but it was released today ^.^ Without further ado, I present Welcome, Brother:

Available at No Boundaries Press, All Romance eBooks and Amazon. Will be available at other outlets soon :)

Excerpt can be found here.
Posted by Erica Pike at 3:01 PM