It's that time again! Easter! I don't know how the rest of the world celebrates it, but Icelanders go out and buy a hollow chocolate egg stuffed with assorted candies. The shell is thick and yummy and I'm salivating just writing about it. And it's not just some plain old chocolate either! Well, you can get plain milk chocolate, but also dark chocolate, crunchy chocolate, and chocolate with salt liquorice bits in it (don't ask, it's an Icelandic thing, but it's YUMMY). 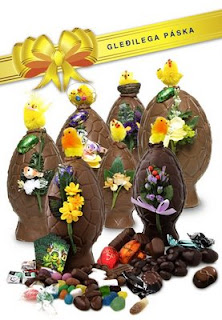 Anyway, I'm here to give away stuff! Not chocolate eggs, but something even better: chocolaty guys ;)

A lot of you already have read my books and it wouldn't be much fun to win a copy of something you've already read. Yes, I could just replace it with a different story, but this will be easier:

I'm offering an e-book to four winners and the winners get to choose which book they'd like.

To be entered into the contest, please comment below with a way for me to reach you, and please state which book you'd like to win if you win :) That's it! Of course, I would love it if people followed my blog, facebook page, twitter, etc., but that's not required. Oh and hey, I know I said I'd have an up-and-running newsletter before this blog, but...well, I've been busy. Next time!

Anyway, here's what's up for grabs:

For weeks, college student Casper has been the victim of sail-by goosing and groping. The problem is that Casper would very much like to get more than groped by those wonderful, big, hot hands.
With a journal full of clues, he sets out to discover who his mystery groper is. However, he may be in serious trouble once he discovers the ominous identity, and it’s not because of the light bondage the groper seems to prefer.

When College professor Daniel Corrigan was brutally kicked out of his home after revealing his true sexuality to his wife, he had to make a whole new life for himself. For the first time in two years Daniel’s main heartache isn’t the none-existent relationship with his two kids, but the fact that the grade-A-sex deal with his student Troy Anderson is about to expire. After a whole semester of office fun, Troy has managed to squeeze his way into the core of Daniel’s soul. Daniel, however, is positive he’s nothing more to Troy than a teacher who can modify a grade.

Short and scrawny college student Harley Santos has a strange relationship with the guy on the other side of his bedroom wall. For weeks, the two have been masturbating to each other’s voices, but they have never met in person.
When Harley’s roommate (Ryan) is asked out on a date by one of his neighbors, Harley is devastated that his wall-mate mistook not-hot Harley for super-hot Ryan. Helping Harley through his heartache is Tasha Novokov, the other neighbor, who is tall, dark, and impossibly handsome.
When Harley’s affections shift to Tasha, his heartache hits an all time high because with all the girls hanging around, Tasha has to be straight.

Jesse's like a bar of soap: the tighter Adam holds on, the faster Jesse slips away. Or that's how it feels to Adam. It doesn't help that Jesse has a girlfriend back home and claims to be straight, but there's no way with all the sparks and physical intimacy flying between the two roommates.
When Adam believes he has reached his ultimate happiness, the bedroom walls come crashing down with a visit from Jesse's girlfriend.
Now Jesse has to decide if he can come to terms with his sexuality, while Adam has to learn to accept that Jesse might never be able to crawl out of the closet.

If you must buy them NOW, you can find purchase info on my website: www.ericapike.com, but of course you should wait until after the giveaway ;)

Before you go, here are three notable things:

- Check out the other countless authors taking part in this contest (they've even marked the m/m ones!).

- Please stay tuned for the m/m-only blog hop on May 17th: Hop Against Homophobia. We have 190 m/m authors, reviewers, and publishers signed up and if you're any of those and would like to take part, the sign-up is still open ;)

- Want to win a copy of my May release, Absolutely Eric? Yeah, it's the cutie below. Go to Goodreads and add it to your to-read list and you might be able to snag one of the two copies I'm offering! If you don't have a Goodreads account and don't want to sign up for one, don't worry, I'm offering a copy in the Hop Against Homophobia ;) 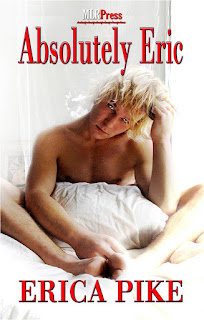 Okay! Go stuff yourselves with chocolaty men - I mean eggs!
Posted by Erica Pike at 2:50 AM