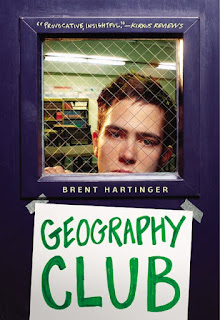 This week is Banned Books Week (Sept 30 - Oct 6th). I have no doubt that many of today's GLBT books are being banned all over the world. However, only a handful of those instances gets reported. Throughout this week, I will feature an LGBT book a day that's been either banned due to homosexual content, or has been under some discrimination and attempts of being banned (for the same or other reasons - note, I've learned that people have been hiding behind "sexual content" and "inappropriate language" to get LGBT off the YA library shelves!).

Today's feature is Geography Club by Brent Hartinger (check out the giveaway at the end of this post). It was "withdrawn" in 2006 at the Curtis Junior High and Curtis Senior High Schools libraries after parents claimed the book could result in ""a casual and loose approach to sex", encourage use of Internet porn and the physical meeting of people through chat rooms".  In 2009-2010 there were attempts to have it removed from the West Bend (WI) Community Memorial Library by the West Bend Citizens for Safe Libraries group, but the attempt was unsuccessful. Score one for the library! (Information and quotation from the Marshall University Libraries).

Here's a short, but interesting essay by the author on the whole matter: They Tried to Ban My Gay Teen Book.


Russel Middlebrook is convinced he's the only gay kid at Goodkind High School.

Then his online gay chat buddy turns out to be none other than Kevin, the popular but closeted star of the school's baseball team. Soon Russel meets other gay students, too. There's his best friend Min, who reveals that she is bisexual, and her soccer–playing girlfriend Terese. Then there's Terese's politically active friend, Ike.

But how can kids this diverse get together without drawing attention to themselves?

"We just choose a club that's so boring, nobody in their right mind would ever in a million years join it. We could call it Geography Club!"

Brent Hartinger's debut novel, what became first of a series about Russel Middlebrook, is a fast–paced, funny, and trenchant portrait of contemporary teenagers who may not learn any actual geography in their latest club, but who learn plenty about the treacherous social terrain of high school and the even more dangerous landscape of the human heart.


You can buy this book from major (and minor) retailers, like Amazon and Barns&Noble. Or you can try to win a copy by leaving a comment along with your email address* to any of the banned books posts this week (only one entry though and one prize for the whole week). That's right. To kick off the Banned Books Week, I'm giving away an e-copy of Geography Club by Brent Hartinger. The premise of this story sounds so interesting and I love the blurb.

*If you don't want your email address posted here, feel free to send me mail at eripike at gmail dot com. I will also make this contest open in the YA LGBT Books on Goodreads, for those who aren't old enough to enter this site.

The winner will be randomly drawn, contacted and announced on October 6th - the last day of this awareness week.
Posted by Erica Pike at 3:35 AM