I'm continuing with Adam Maxwell, the hero of A Life Without You. This is his month.

This snippet is from when Jesse goes back home over the holidays. Adam has nowhere to go because he has no family, so he stays behind in the dorm along with his buddy Eric. Jesse’s girlfriend (Anne, A.K.A Chirpy) lives in Jesse’s little hometown and Adam can’t stop worrying about it. Adam, (A.K.A Emoman - as Eric sometimes calls him), is very territorial about Jesse.

My heels kick against the sofa where they dangle over the arm. There’s a split in the ceiling that reaches from the chandelier to the far corner of the living room. A cheesy Christmas movie plays on the TV, but I don’t care to watch it. A copy of Publishers Weekly lies tented on my stomach – I can’t even remember what the article was about.
“Come on, Adam. Stop brooding. Or at least if you’re gonna continue, don’t sit so close to that cactus. You’re bumming the both of us out. See? Its tiny little cock has gone limp.”
The magazine slides to the floor as I turn my head to see the sorry-looking cactus behind the couch. What Eric is referring to as its penis hangs limp on the ‘body’ like it always has.
“Who was that you were talking to on the phone earlier?” Eric asks.
“Jesse.” He’s called me three times in one week. That’s more often than he cares to hear from Chirpy over the same period of time. Chirpy has answered Jesse’s phone twice when I've called him and we ended up snapping at each other like two hissing cats. I know I've given her every reason not to like me – more than she knows – but I have no idea if Jesse knows about our animosity.

The book is available from most online retailers ($6.99). Here are direct links to a few: MLR Press, All Romance eBooks, Amazon, Barnes & Noble. It's also available in paperback from Amazon and B&N ($12.99).

You can read an excerpt here.

Please visit the Saturday Seductive Studs headquarters to find the other authors sharing snippets from their own works ^.^

Adam's character card. I had loads and loads of these printed. Ah jeez, looks like I'll be forced to attend all those conferences! ;) 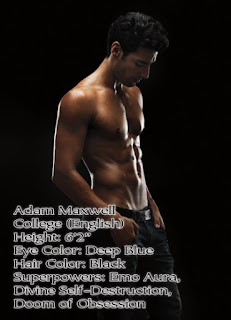