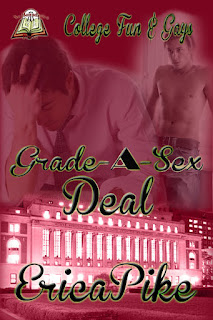 I'm happy to announce that Grade-A-Sex Deal was released by No Boundaries Press today! I'm doing a pretty funky office-chair wiggle. So glad I have a tiny heart shaped sticker over my webcam ^.^

When College professor Daniel Corrigan was brutally kicked out of his home after revealing his true sexuality to his wife, he had to make a whole new life for himself. For the first time in two years Daniel’s main heartache isn't the none-existent relationship with his two kids, but the fact that the grade-A-sex deal with his student Troy Anderson is about to expire. After a whole semester of office fun, Troy has managed to squeeze his way into the core of Daniel’s soul. Daniel, however, is positive he’s nothing more to Troy than a teacher who can modify a grade.

A Grade-A-Sex Deal is the second of five in a series of short stories, College Fun and Gays.

I've set it up on Goodreads.

It's $2.99 and available from these sellers (will add links as they pop up):
No Boundaries Press Store (to buy directly from the publisher)
All Romance eBooks
Amazon.com
Amazon.co.uk
Barnes & Noble
Bookstrand