Back to School Bash! 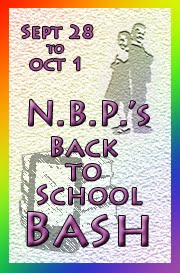 Sure, school started almost a month ago, but we like to throw a bash anyway! Welcome to the No Boundaries Press's Back to School Bash where I'll be offering an e-copy of one of my College Fun and Gays stories. If you already have it, you may choose from one of the other books in this series.

I'm supposed to write about my best or worst back-to-school experience from when I was a young girl. I could write about when I insisted to wear make-up in first grade - got teased and never did it again; or when we were given a shot the first day back and I crawled under the table to hide - got teased about it and was first to offer my arm the next time; or when I was waiting to get into the classroom and got a basketball in my face (didn't get teased about that one, but the pain was bad enough). Hey, I like to write optimistic, fun stories, but sadly I don't have too many of those from school. I KNOW I had a good time, because I had friends, but the bad times so outweigh the good because of their severity that I'm having a hard time remembering the good ones.

So I'm writing about my boy-friend (not boyfriend). We used to walk to school together every day for the first few years. We were best friends and despite everything, the first day back to school was always exciting. But there was a dark shadow looming over every day walking to and from school - three or four dark shadows in the form of older boys who lived in the neighborhood. They'd ambush my friend, chase him to school and I'd stand back with galactic fear in my heart every time. I was scared as hell of them. It confused me. I knew he didn't like the beatings, but he laughed when they were chasing him. It wasn't until much later when I read up on bullying that I learned that his behavior is very common among bullied kids, to pretend that they're not afraid and that they're part of the "fun". They did catch him often - and they did on that first day back - beat him up and then gave him a hard time for crying (all three to four of them calling him a crybaby because he got beat up - idiots). This happened day after day for years, starting from the age of six.

I'm probably putting a huge damper on the hop with this story, but this is what pops into my mind when I think "school" in relation to my own childhood. These bullies not only hurt my friend in his past and future; they also hurt me in my past and future. In all my years of therapy, I've been trying to pinpoint the origin of my anxieties and depression. When did I become scared, insecure and anxious? When did I start to worry about people being hurt and people dying? When did start feeling so helpless, like the whole world was big and bad and there was nothing I could do about it? When did I start blaming myself for everything, and when did it start feeling so that everything I tried to do was never good enough?

It's only recently that I've been diagnosed with Post Traumatic Stress Disorder. There have been a number of events that have triggered the PTSD, but watching my friend being bullied by several older guys for years was the the first time I got PTSD, and the one that set my path for more anxiety and insecurity. I learned very early that people are dangerous and that I am but a teeny tiny person.

I've met four of those bullies in my grown-up years (they were six guys all together, but were usually only three-four at a time, always with the same two main bullies). Three of those I've met sent creepy crawlies down my back while I talked with the third (one of the two main bullies) and learned that he's actually a nice guy. He's the only one who doesn't scare me anymore, so I guess people can change.

For weeks, college student Casper has been the victim of sail-by goosing and groping. The problem is that Casper would very much like to get more than groped by those wonderful, big, hot hands.

With a journal full of clues, he sets out to discover who his mystery groper is. However, he may be in serious trouble once he discovers the ominous identity.

Want a free read? Half-Baked Promises is a free story I wrote for the M/M Romance Group on Goodreads. It can be downloaded in pdf, mobi and ePub :)

Wait... Are you looking for the GLBT Madness Hop? Scroll down, or click here. That's right, I'm doing TWO hops at the same time - different prizes. That should burn some calories :O You can take part in both contests, just comment on both posts :) 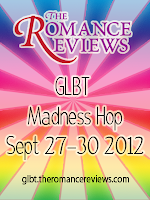 Please visit the other people taking part in the Back to School Bash: