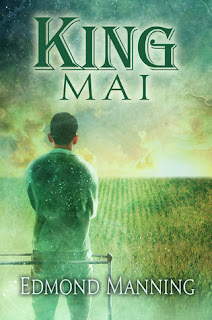 I cannot believe I got Edmond Q. Manning to do fun facts with me and I cannot believe I didn't ask him sooner! I shouldn't be surprised he accepted, he's a very fun guy. I met him at GRL last year and I'm very much looking forward to hang out with him again this year. I've made him an honorary Viking, because he'd fit right in here in Iceland, and dubbed him Edmond the Fierce (because he battles zombies in his spare time...or at least plans to once the zombie apocalypse breaks out). 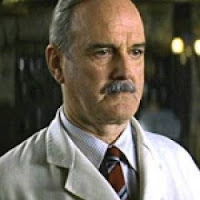 1. First off, I lied about my middle initial being Q. It’s not.

What do you mean, you lied?? Just for that, I'm sticking a picture of John Cleese as Q instead of that new hottie Ben Whishaw (God, Ben's soooo hot!)

Men and yellow shirts. Douglas Black has one too, though is isn't lost because he's not allowed to wear it outside.

3. Generally, I don’t eat jam. I've got nothing against jam but when I’m eating toast, I’ll only use jam about 15% of the time. I love blueberry jam best, strawberry second, raspberry third. I also make a ton of raspberry jam from the raspberries in my back yard and give jars as birthday gifts and as a host/hostess gift when they invite me over to dinner.

So that's what all that jam's for? I was wondering if you were stocking up for the apocalypse, maybe to pull a possum act and use as fake blood if the zombies come into your house.

It never aired in Iceland, but every respectable adult in Iceland knows that Americans love Gilligan's Island.

5. I buried a small treasure, something I value, at the base of a redwood tree in Muir Woods in northern California outside San Francisco. The tree is off the path and pretty far back in the woods, so I’m confident it will never be found, certainly never by me. But I like to believe someone will discover it, perhaps hundreds of years from now.

6. I never cheated on a test in high school or college. Tempted, yes. I remembered and profited from previous students who would share stuff like, ‘this professor likes essay questions about Chaucer…’ But never consciously cheated.

I did. Once. I couldn't remember how to say "boots" in Danish and my friend (unasked) wrote it on her eraser and gave it to me. I've never forgotten that word since, so you see, people learn best from cheating!

If you'd be different as Gus, then I'm glad you weren't born on August 1st ;)

8. I had skin cancer in my twenties. I had a melanoma removed (those are the kind that successfully kill you). There’s a long story about how I got diagnosed and treated, but the short version is that an administrative secretary behind a desk was the first person to take my concerns seriously and she snuck me into a cancelled appointment the next day instead of making me wait four months for an appointment. I would have been dead. That administrative secretary saved my life.

9. At parties, I always want more deviled eggs than I allow myself to eat. I know what a pain they are to make. I want to eat twelve of them, but I limit myself so that others can enjoy them, too. But if there were 300 deviled eggs on the table and no one was in danger of not getting any, there is possibly no limit to how many I would consume.

I've never had a deviled egg. They look yummy.

10. I always wished I had black hair. I think black hair is sexy as hell.

Ohhh, me too. Sexiest ever. Seriously, ask my cousin, Thora. We strongly disagree on this matter.

Adopted from Thailand and never one to fit in with the local bubbas, life has been rough around the edges for Mai Kearns, even before he came out of the closet. Now, almost ten years past the torture of high school, Mai still can't catch a break: he and his parents stand to lose their beloved farm.

How will a “King Weekend” help change Mai’s fate? What has narrator Vin Vanbly been up to for the four weeks he’s been sneaking around Mai’s hometown? At the urging of a ransom note from ‘The Lost Kings,’ Mai embarks on an impossible treasure hunt chasing mystic poetry, Fibonacci Hopscotch, ancient prophecy, the letter ‘x,’ and a confounding, penguin-marching army.

The stakes are high: if Mai fails, the Lost Kings will permanently claim him as their own. Finding the treasure may unlock the secret to saving his family farm. But can this angry farmer risk opening his broken heart before the weekend is over? Mai Kearns has 40 hours to get very, very curious in this second installment of The Lost and Founds.

Available on Amazon and ARe.