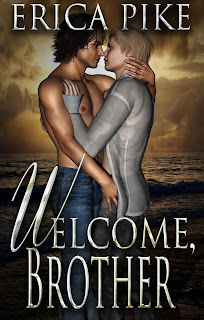 And now they come rolling in ^.^ I've already formatted two other CFaG stories and they'll be out over the next couple of days. Hopefully, they'll all be out of my hands by the beginning of next week - Cold Hands included - so I can focus on other things.

Welcome, Brother had a different cover as this is the second edition. It's been edited by Douglas Black and the cover is by Zathyn Priest at Scarlet Tie Designs.

Welcome Brother focuses on acceptance in college and gay bashing.