Absolutely Eric is Out and Proud 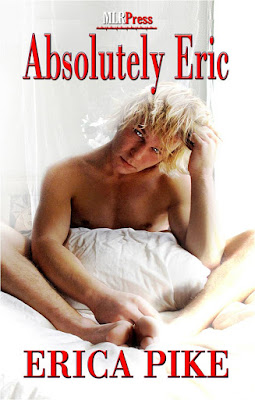 It's out! Absolutely Eric was released late last night and can be bought from MLR Press and Amazon. Other sales links should be available soon.


Eric Wesley is short and snazzy, hot and happy. Or that’s what he thought. After three years of living on the wild side he’s tired of being a playboy and wants to find love.

Eric, however, has never been in love before and doesn’t see that the guy who’s been gazing at him all summer might be Mr. Right. Boring-suit-guy Alexander Centauri isn’t only style-less and clumsy, but also terribly awkward. After a miserable date, Eric plants Alex on another guy’s lap and goes after Mr. Wrong…who looks so right.

When Eric realizes his mistake, it might be too late.

Now, remember, this isn't your everyday sweet, easy-sailing, minimum-conflict romance. There are strong conflicts here, the characters are flawed and make mistakes before they reach their happy ending. This is the same with almost everything else I write.

Also, another note: We saw Eric in A Life Without You and we see Adam in Absolutely Eric. The two stories are written from two different PoV's (first one from Adam's and the second story from Eric's). In A Life Without You, Adam experiences Eric in a certain way, and in Absolutely Eric, Eric experiences Adam in a certain way. There's no way Eric can see Adam exactly as he really is, because Eric's never been inside Adam's head and doesn't know him intimately (as the readers of ALWY do). The same goes for Adam's view of Eric (he thinks Eric is like so and so while real Eric is actually like so).

Wow, that sounded confusing...perhaps I should have drawn a stick-figure picture to explain ^.^ I color coded in hope that it'll be a little easier to understand.

Before I go! The winner from Stumbling Over Chaos giveaway is Wendy, and the winners from the Goodreads giveaway are Juliana and Nichole (Dirty H) - they have all been contacted. Congrats girls :D
Posted by Erica Pike at 7:36 AM