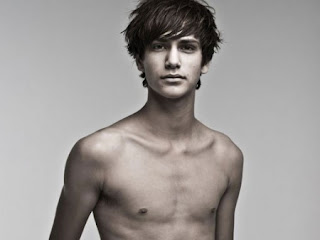 Okay guys, I explained about my straightforwardness last week and how, although I’ll try not to be offensive, I’ll be open about subjects that may be considered taboos. Here's one:

It’s Twink Week here at my blog, in honor of Eric Wesley from my upcoming release, Absolutely Eric.

Before we start, here’s the definition of a “Twink” on Wikipedia:

"Twink" is a gay slang term describing a young or young-looking gay man (18–21 age category) with a slender, ectomorph build, little or no body hair, and no facial hair. [4][5] Someone older than 21 with similar looks and build is said to be "twinkish." In some societies, the term chick or chicken is preferred.[6] The related term twinkle-toes, which implies that a man is effeminate, tends to be used in a derogatory manner.[7] The terms can be complimentary or pejorative.[8][9]

See that last line? Whenever I use the word “twink”, I never mean it in a pejorative manner. I love writing twinks. They’re never “girly” in my stories (see my rant on that term): They’re guys, they’re strong and they’re usually the stars of the stories (not in a flamboyant way – except for Eric). Eric is interested in fashion, he wears eyeliner and he likes doing things with his hair, but he’s a guy through and through.

The term is often used in the pr0n industry, but it’s not exclusive to it. The LGBT community uses it freely, but there seem to be different meanings to the world. Usually it’s only a “look”, but Homorazzi goes further and describes twinks as "...generally quite young (18 to mid-20′s), skinny, have essentially no body hair and may frequently be found applying foundation or fake tanning lotion. Generally, they act as though the entire world revolves around the fact that they are young and gay." Yeah, no, whether or not that's the correct classification, that's not what I think when I think "twink". I’m merely talking about the look, and not personality. Is this stereotyping? I don't believe so, because (leaving out the personality) it's just a look, like "bear" and "athletic" is a look.

Should twinks be ashamed of being twinks? No. “Bears” are generally proud to be bears, so why shouldn’t twinks be proud to be twinks? They're no less men than bears.

Should non-GLBT people not use the word “twink”? I don’t see why they shouldn't. It may be a slang among GLBT people, but it's become very widespread. People who know me know I'm the advocate for "more exposure = faster acceptance", so even if some people see twinks as a negative thing, the more they hear the term and the more the term is discussed, the better to get over the negative aspect.

Should I not talk about twinks because I’m a semi-straight woman? Again, I don’t see why I shouldn't. I write m/m literature, I’m extremely supportive of GLBT people, and I don’t ever use the word “twink” in a pejorative manner. I also think "twinks" are attractive, just like I find all sorts of other looks attractive.

Should I not have brought up this topic? Perhaps not, but just like brunettes, beefs, and bears can be talked about (in a good, non-offensive manner), twinks should be okay to talk about too.

So, I officially welcome you to Twink Week. I’ve got some awesome people visiting with guest blogs, and I hope we can have fun.

Header image
Posted by Erica Pike at 3:35 AM