A Special Love for Twinks, by Havan Fellows 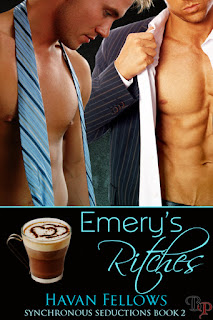 Well hello there my lovely hostess, Erica! Thanks so much for letting me crash your party this week *bouncing and smiling*...I love your place...oooooh look at how comfy that couch is! *plops on couch and starts to tuck feet under me...stops and blushes* Sorry...guess I got a little too 'at home'...hehe...but I figure since we are sharing a release date for our new books we were pretty much like siblings you know? BTW – what's the chances that I could borrow that lipstick—that color is amazing! Oh...never mind siblings, we could be kissing cousins...hehe

Okay okay...sorry, I'll behave. But you know it is soooooo hard to do sometimes. Especially when you ask me to talk about one of my fave subjects...twinks! Now let me point out right from the start—I don't have a complete fave 100% type of man...oh no—that would be sooooo unfair to me! *smirks* But I do have a special love for each different type...and most definitely a special love for twinks.

So...what makes a good twink? Well isn't that the thousand dollar question? *heads desk* I've asked numerous people about this, pondered over what I believe a twink to be and even googled it some...(that brought up some very interesting sites...and no I won't mention which ones I bookmarked for further study...*clears throat*)

The list I've come up with is diverse while still circling around the same traits (um...is that even possible?)...so instead of telling you what I believe a twink to be I think I'll list a few of the attributes I discovered and ask you what you believe makes a good twink.

Now remember –these are not my personal ideas, this is pure research baby...without a scientific formula that is...*eye roll giggling*

Wow...and that is without going into the sexual aspect of the word...*eyes bug out*...is there any wonder why I am having a hard time nailing down what being a twink might mean to others?

All I know is I love them... just like I know that I will freaking adore Erica's twink Eric...this world is plenty big enough for all kinds, especially those yummilicious twinks. *big smiles*

So please, leave a comment telling me what you think...and after you are done enjoying all Eric has to offer in Absolutely Eric...maybe you'd like to check out what my boys have to offer in Emery's Ritches...

Blurb:
Ritchie Lymings is wallowing in self-pity after seeing the man he loves—his best friend—reunited with his arch enemy. He's drowning his sorrows in coffee and caramel when an irritating stranger barges into his life, determined to make him smile. Even if this interloper is too dense to understand his faux pas, Ritchie figures he may be good for a quickie to get his mind off of his immediate situation. A simple round of love 'em and leave 'em sounds promising.

Emery Hutchins recognizes Ritchie immediately when he stops for his morning coffee and breakfast. His friend Ryder had been telling him stories about "the infuriating twit" for years. Fate and coincidence were two things that normally gave Emery cause for pause, but he couldn't let this opportunity pass him by. Unable to relinquish control to fate though, he immediately devises a plan to make the deliciously snarky Ritchie his own, one hundred percent completely.

But for these two diverse personalities there is one major problem. How can Ritchie's attitude and Emery's meticulousness blend together, or is this an oil and water mess?

Excerpt:
"Oh wow, and here I feared the worst, that you would never break through that dark look and smile. Now that I've seen your smile, I'm pretty sure I never want to see you without it."

Snapping out of his daydream, Ritchie turned to the intruding voice and set eyes on the sexiest man he'd seen in a long time. Short golden hair on the sides, longer in front, clear silver-blue eyes, high forehead, and pouty cupid's bow lips. Hot damn, he's a god.

After a few tense seconds, Ritchie finally found his voice and attempted to put it to good use. "Can I help you?" Okay, not good use, but use at least.

"Most definitely, in so many ways too."

Ritchie's brows drew together and he couldn't hold back the growl. "Excuse me?"

The man smiled, wide and easy. "I wondered if I could share this table with you? This place gets busy in the blink of an eye. Plus I seem to have bought two coffees and two scones so I was thinking we could have breakfast together." And with that, he placed two cups and the single plate with two cinnamon chip scones he had meticulously juggled onto the table. He then proceeded to make himself at home in the chair across from Ritchie.

Ritchie glanced around and noted at least three empty tables, and pointedly glared back at his interloper.

That easy breezy grin didn't falter and the man didn't miss a beat. "That table wobbles, almost spilled a whole cup of their hazelnut all over me the other morning." He pointed to empty table number one. Then he directed his finger at empty table number two. "Sitting right next to that table you'll find Mrs. Glein. She's a widow and sweet as pie, but keeps insisting I meet with this mysterious grandson of hers named Stevie. Now considering she only has one grandchild, a beautiful woman named Stephanie, I figure she wants to convert me. I would rather skip that conversation this morning." Ritchie glanced over at the old lady. She smiled widely at the stranger and he waved and nodded back in acknowledgment.

Then he turned his attention to the third table that now housed two students with their laptops. "And darn if I didn't just miss that table by a millisecond. Good thing I got this seat when I did, huh?"

Ritchie took another sip of his coffee, trying to process how to lose this guy. He was obviously ill in some department no matter how hot he might be. Ritchie tilted his cup all the way back, then remembered it was empty. He set the mug back down a little too heavily causing a loud clacking noise that caused many of the patrons to look up with disapproving glares.

Then he looked back at his company, who held the extra steaming cup out to him. "Caramel latte, I believe?"
Begrudgingly, Ritchie took the cup and sipped some more. Damn near everything could be solved with the blessed combination of coffee and caramel. Staring into those clear silver-blue eyes from across the table, he stressed the damn near part.

"So, to what do I owe the great honor of your company?"

Grinning (of course, Ritchie mentally rolled his eyes) the man said, "You can owe the great honor to the fact that I didn't want to eat breakfast alone. Usually I don't mind, but when I noticed you so melancholy I decided today I minded."

Ritchie nodded. "Ah, I get it now. You're one of those do-gooders that just has to stick his nose where it isn't wanted. Come to turn my frown upside down, have you? Thanks, I appreciate the pity, but I'm doing just fine pitying myself. Don't need your help."

"But you did need my coffee and you do need to eat something." He placed one of the scones on a napkin in front of Ritchie.

He winked at Ritchie. "Not exactly, I don't have the proper equipment for that. Though now I think I should start pitying myself that you didn't notice." And for the first time throughout this whole weird interaction, the stranger's smile turned into an exaggerated version of a pout.

Ritchie rolled his eyes for real this time, and against his will, he felt himself smirking in response to that pout.
"Ah ha!" Not surprisingly the pout disappeared. "I knew I would break down your defenses eventually. So who is he?"

"Excuse me?" Hadn't he already said that during this conversation?

"Who's the guy that's got you all knotted up? Only way for someone to look that downcast is when love's involved. Since you aren't all pissy and mad, well, not any more than what I assume's the norm for you," the man chuckled at his own joke, "I have to deduce that it's unrequited love. The guy obviously doesn't understand what a joyful gem you are. So I repeat, who is he? Shall I hunt him down and explain the error of his ways?" He popped a bit of scone into his mouth and managed to smile through the closed-mouth chewing process.

"I'm sorry, am I putting off a vibe saying that I'm a people person or something? Because if so, I need to fix my vibe-o-meter. What makes you think it's a guy anyway?"