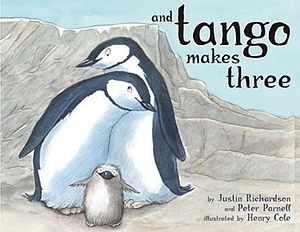 Day three of Banned Books Week. I planned to feature lesser talked-about LGBT books that have been subjected to prejudice in the form of having been banned from libraries or have been through attempts to be banned. However, And Tango Makes Three is true story of two male penguins that adopted an egg! I just had to feature that. Plus, the whole circus around having it banned just blew my mind.

And Tango Makes Three is a story for kids aged 4 and up, and I'm telling you guys, it is sooooo sweet. Here, you can watch it on YouTube with the images (that made me go "awww!" so many times and I've vowed to buy this book and read for my kids. I'll have to translate it, but I'm doing it. And I left an Amazon review).

Here are Author's Note from the YouTube video: "All of the events in this story are true. Roy and Silo are called chinstrap penguins because of the delicate line of black feathers that loops under their beaks, as if to hold a hat in place. After years of living side by side in the Central Park Zoo, they discovered each other in 1998 and they have been a couple ever since. Tango, their only chick, was born from an egg laid by another penguin couple named Betty and Porkey. That couple had often hatched their own eggs, but they had never been able to care for more than one at a time. In 2000, when Betty laid two fertile eggs, Rob Gramzay decided to give Roy, Silo, and one of those eggs a chance to become a family. If you go to the Central Park Zoo, you can see Tango and her parents splashing about in the penguin house along with their friends, including Nipper, Squawk, Charlie, Wasabi, and Piwi. There are forty-two chinstrap penguins in the Central Park Zoo and over ten million chinstraps in the world. But there is only one Tango.

But of course there have to be closed-minded people to object this sweet little story! This book has been at ALA's top 10 list of most challenged books in America five years in a row! In 2006, 2007, 2008, and 2010 it was THE most challenged book (as in, most reported for inappropriateness). In 2009 it was "only" the second most reported book. Thankfully, it didn't make the top 10 in 2011.

Take a look at this:

You can buy And Tango Makes Three from Amazon, Barnes&Noble, and other retailers.

The winner will be randomly drawn, contacted and announced on October 6th - the last day of this awareness week.