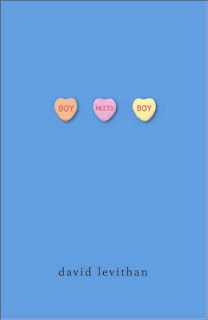 Again, I'm borrowing information and quotation from a preexisting blog. This one from Censorship-Free Libraries where it says that there is nothing objectionable about this book other than the content (as in, they can't ban it for bad language or sexual content). However, the blog also says: "In spite of its G rating, challenges to Boy Meet Boy crop up.  It was challenged in 2009 at the West Bend (Wisconsin) public library [West Bend again... Remember the attempts to ban Geography Club?], after the library put in on a gay-themed reading list.  The Oklahoma Library Association noted a challenge in 2003. Neither of these direct challenges was successful, although an article in Random House Inc. magazine indicates that the book is stolen from libraries with some frequency."

Honestly? Stolen so it won't be available in the libraries? Some people will go to any lengths...

Considered groundbreaking upon its publication in 2003, Boy Meets Boy is now 10 years old and David Levithan's debut about two teenage boys finding love is still in print and still as heartwarming. The world was different when Boy Meets Boy first appeared and attitudes have changed, but this novel is just as relevant and enjoyable as it was then. To mark the 10th anniversary, this edition features new backmatter from the author, including an original story about the scene-stealing, fan-favorite Infinte Darlene--literature's only star quarterback and homecoming queen. David is now considered one of the most important voices in YA literature, having since authored Every Day, Nick & Norah's Infinite Playlist with Rachel Cohn, and Will Grayson, Will Grayson with John Green, and fans of his more recent books will not be disappointed by his very first.

You can buy Boy Meets Boy from Amazon, Barnes&Noble, and other retailers.

If you want to read an excellent post about banned books, I recommend Banned Books Week: Smoke Screen of Hypocrisy.


The winner will be randomly drawn, contacted and announced on October 6th - the last day of this awareness week.