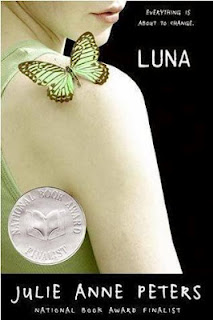 Fourth day of Banned Books Week and I decided to feature a book about a boy who is a girl on the inside: Luna, by Julie Anne Peters. I have read both the blurb and a short summary on Wikipedia and I must say, I have to have it! Jeeze, I think I'll probably end up buying paperback copies of all of these books and donate them to Iceland's LGBT center. Hmm...or maybe I should just donate them to my local library instead, so non-LGBT people will be more inclined to check them out.

Regan's brother Liam can't stand the person he is during the day. Like the moon from whom Liam has chosen his female namesake, his true self, Luna, only reveals herself at night. In the secrecy of his basement bedroom Liam transforms himself into the beautiful girl he longs to be, with help from his sister's clothes and makeup. Now, everything is about to change-Luna is preparing to emerge from her cocoon. But are Liam's family and friends ready to welcome Luna into their lives? Compelling and provocative, this is an unforgettable novel about a transgender teen's struggle for self-identity and acceptance.

Now, of course there's controversy. I mean, if books about two male penguins hatching an egg together and raising little Tango is considered by some people harmful to kids, then a book about a guy who's a girl will definitely be considered harmful. I mean, we can't let people be themselves and be accepted for it, now can we? No, that would make the world too accepting and there wouldn't be enough balance between justice and prejudice and it would result in the end of humanity as we know it.

Now, my university teacher always says that Wikipedia isn't a reliable source, but I'm going to quote it anyway:

"Although there is not much published about the censorship of Luna, the novel is part of the list of restricted/banned books of Texas due to the topics of transgender and homosexuality as well as rough language.[1] Despite winning multiple awards, the book revolves around sexual orientation, which is often left out of the school curriculum."

That's just the thing. Another way to keep these books hidden from kids (and thereby censored) is to not include them in the school curriculum. I think it should be mandatory to have some sort of (positive) enlightenment on LGBT (and racial) matters in every school - not just once but over and over to practice acceptance. I'm going to check the reading list in the school my sons will attend next year. I swear, if my Icelandic was better, I'd spend time translating some of these books and try to get the national school board to include them in the schools (I doubt they would object, the problem is that we don't have that many Icelandic MG/YA LGBT fiction).

According to the Banned Books Database, Luna has been challenged for "Dysfunctional family (family problems), Sexuality (Transexuality/Transgender), and use of Profanity".

You can buy Luna from Amazon, Barnes&Noble, and other retailers.

The winner will be randomly drawn, contacted and announced on October 6th - the last day of this awareness week.