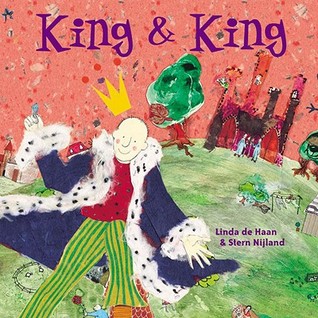 For the sixth day of Banned Books Week I'm featuring King & King by Linda de Haan and Stern Nijland. Another children's book that's been repeatedly challenged, despite winning awards. Published in 2003, it was on ALA's top 10 list of most frequently challenged (reported) books two years in a row (2003 and 2004). Not the five consecutive years And Tango Makes Three got, but getting on that list once is bad enough.

As the title suggests, this book is about a prince who marries another prince. According to some Goodreads reviews the women in this book are displayed in a very negative way, but the reason this book is on ALA's list is because of homosexual content. It's clearly stated - no dancing around the reason.

I like this article about the controversy surrounding this book, especially this part:

"The core of this battle is, of course, a fight over information, and opponents of gay rights know that the more information people, including kids, get about homosexuality, the less likely they are to end up being prejudiced against gays and lesbians."

That's exactly why people are trying to ban these books.

Once there lived a lovelorn prince whose mother decreed that he must marry by the end of the summer. So began the search to find the prince's perfect match and lo and behold......his name was Lee. You are cordially invited to join the merriest, most unexpected wedding of the year. KING & KING is a contemporary tale about finding true love and living happily ever after, sure to woo readers of any age. A great gift. Exuberant artwork full of visual play calls for repeated readings. Accelerated Reader quiz available.

You can buy King & King from Amazon, Barnes&Noble, and other retailers.

The winner will be randomly drawn, contacted and announced on October 6th - the last day of this awareness week.
Posted by Erica Pike at 11:00 AM